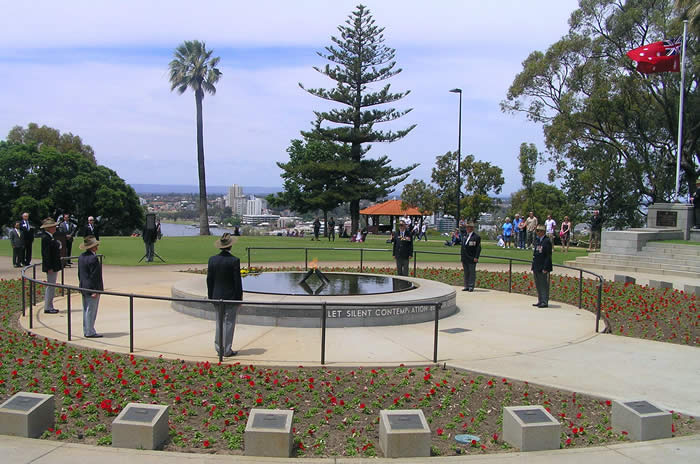 They shall grow not old, as we that are left grow old:
Age shall not weary them, nor the years condemn.

At the going down of the sun and in the morning,
We will remember them

While the roles of the Deputy Warden and the Sub-Wardens are administered through Highgate RSL Sub-Branch, these positions are not exclusive to Members from Highgate or even other Members from the RSL, and any person wishing to volunteer will be most welcome. For further information, please contact the Deputy Warden *(link to Committee page).

Prior to WWII, Sub-Wardens came from Members of the Subiaco RSL Sub-Branch and sometimes included Members from the Boy Scouts Association.

The Roll of Current and former Deputy Wardens and Sub-Wardens is shown here.

Highgate would appreciate any historical information that you or your family may hold in relation to those who performed the Deputy or Sub-Wardens’ duties in earlier times. Please contact the Website Administrator at website@highgate-rsl.org.au.

Remembrance Services can be held at either the War Memorial or the Flame of Remembrance. Services are silent (Memorial Inscription: Let Silent Contemplation be your Offering) except for the recital of the Ode and the playing of the Last Post and the Reveille or Rouse, though sometimes music can be played when there are a large number of wreaths to be laid.

Services are conducted using the format as follows – the Honour Guard is mounted, the Catafalque Party is mounted (usually only during major commemorations when ADF Members also serve in the Honour Guard), wreaths are laid, the Last Post is played, the silence is observed and the Rouse is played. This marks the end of the Service and welcomes, addresses, prayers, hymns and the National Anthems may be played as appropriate to the occasion. Following this, the Catafalque party is dismounted, followed by the Honour Guard.

The major Services are the Dawn Service on ANZAC Day held at the State War Memorial and the Remembrance Day Service held at the Flame of Remembrance.

Ex-Services, Kindred and Allied Services Organisations may use the State Memorial or Flame of Remembrance for commemorative purposes. Prior permission must be obtained from the RSL WA State Branch (who also notify BGPA for joint approval) and who will take the booking and advise the Deputy Warden. About 30 such Services occur annually and all are supported by the Honour Guard (Deputy Warden and Sub-Wardens).

Other than for the major Services, the Deputy Warden and Sub-Wardens open up and set-up the Memorial or Flame of Remembrance for each Service, and provide the public address system. Kings Park staff usually removes wreaths and floral tributes some days after the Service.

The appointment of the Warden of the State War Memorial is the responsibility of the RSL WA State Branch. The Memorial was unveiled on 24 November 1929 with the first Warden appointed for 1930. The list of Wardens is shown on the Honour Board on display in the WA RSL State Branch Office.