In Early years, each member was given 10 poppies to sell. Then we manned the tins. 1914 – 1918 Veterans set the high attendance standard that still prevails today.

Ex president at Council House rattled a tin under the Lord Mayor’ nose, received $50.00. Ex President at the Adelphi Hotel rattled a tin at a beautiful woman, she asked “Why?” Doug explained, she made a magnificent gift and demanded a kiss. Doug obliged.

Last years collection was our best!

The History of Poppy Day

11 November is poppy day, the time of the year when by the wearing of a simple emblem, a red poppy, we salute the memory of those who sacrificed their health, their strength, even their lives, that we might live in a free country.

Long known as the corn poppy (Papaver rhoeas) because it flourishes as a weed in grain fields, the Flanders poppy as it is now usually called, grew profusely in the trenches and craters of the war zone. Artillery shells and shrapnel stirred up the earth and exposed the seeds to the light they needed to germinate.

This same poppy also flowers in Turkey in early spring – as it did in April 1915 when the ANZACs landed at Gallipoli. According to Australia’s official war historian C.E.W.Bean, a valley south of ANZAC beach got its name Poppy Valley “from the field of brilliant red poppies near its mouth”.

Whilst the red poppy is a symbol of modern times, legend has it that the poppy goes back to the time of the Mogul leader, Genghis Khan, as the flower associated with human sacrifice. In the 12th and 13th centuries, the Mogul Emperor led his warrior hordes on campaigns south to India, and west to envelop Russia as far as the shores of the Black Sea. The policy adopted by the armies of Genghis Khan was simple and effective. They would isolate their enemies, surround and completely annihilate them. The legend states that on the battlefields that were literally drenched with blood, white poppies grew in vast profusion.

The modern story of the poppy is, of course, no legend. In the years immediately following World War 1, governments and the whole of society, had not accepted the responsibility for those incapacitated and bereft as a result of war. In Britain, unemployment accentuated the problem. Earl Haig, the British Commander-in-Chief, undertook the task of organising the British Legion as a means of coping with the problems of hundreds and thousands of men who had served under him in battle.

In 1921, a group of widows of French ex-servicemen called on him at the British Legion Headquarters. They brought with them from France some poppies they had made, and suggested that they might be sold as a means of raising money to aid the distressed among those who were incapacitated as a result of the war. The first red poppies to come to Australia, in 1921, were made in France.

In Australia, single poppies are not usually worn on ANZAC Day – the poppy belongs to Remembrance Day, 11 November. However, wreaths of poppies are traditionally placed at memorials and honour boards on ANZAC Day.

The red Flanders’ poppy was first described as a flower of remembrance by Colonel John McCrae, who was Professor of Medicine at McGill University of Canada before World War One. Colonel McCrae had served as a gunner in the Boer War, but went to France in World War One as a medical Officer with the first Canadian Contingent.

At the second battle of Ypres in 1915, when in charge of a small first-aid post, he wrote in pencil on a page torn from his despatch book: 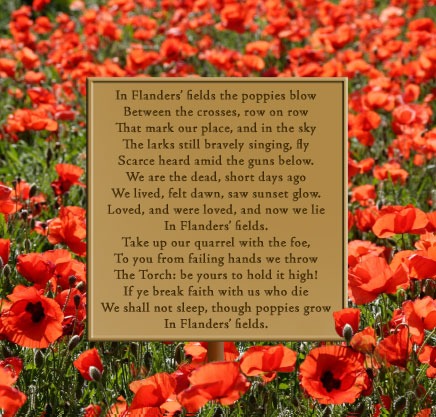