The History of Highgate RSL

To ensure that programs are in place for the well-being, care, compensation and commemoration of serving and ex-service Defence Force members and their dependants; and promote Government and community awareness of the need for a secure, stable and progressive Australia. 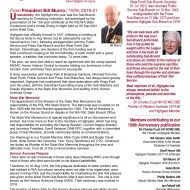 The Role and Objectives of Highgate RSL

To serve the interests of its members, veterans, the ex-service community and members of the Australian Defence Force, the RSL executes its role by effectively implementing objectives which are in accord with the League’s Mission Statement.

Recollections on the Founding of Highgate

The mere thought of the early formation days of Highgate RSL Sub-Branch brings wonderful memories of a band of men who had served their country in time of War and wanted in time of peace to experience the joy of comradeship and an opportunity to be of help to former mates and their dependants.

This was no ordinary gathering of ex-servicemen. It is not stretching the point too far to refer to a unique band of brothers who had experienced the camaraderie of War Service with horrors and challenges and wanted to continue to be of service by meeting together within Highgate Sub-Branch.

One of the most rewarding things of all is the fact that, unlike so many sub-branches started off with great enthusiasm and faded, Highgate is an exception. It has stayed together and contributed in a remarkable way to the activities of the League. It has also reached into the community in many ways.

For example, the Sub-Branch can be very proud of the contribution that is made come hail or shine in supplying Wardens to the State War Memorial with great dignity through the year.

The work by our members on the State Council of the League speaks for itself and is a reflection of the strength the sub-branch maintains.

Some people ask why we were called “Highgate” Sub Branch. The answer is very simple. Prior to World War II there were sub-branches that were identified with vocations and special activities such as Public Service, Press and the like. This was changed and sub-branches had to be identified with a location and not a particular calling or activity. This meant that we had to look around for a name identified with part of the City of Perth.

Most of the obvious names such as Perth, West Perth, North Perth, and South Perth had long since been taken up. Someone came up with the brainwave that Highgate could be identified as a locality within the City of Perth which had not been claimed as the name for a sub-branch.
If you knew the characters who were the prime movers in the formation of the sub-branch, you would readily understand why they were not very fussed about technical details and so Highgate became ours.

Ironically, we never held a meeting in Highgate for 40 years when we had a very congenial and rather sentimental and historic meeting at Max Kay’s Civic Theatre Restaurant.

Some of the earlier activities of Highgate Sub Branch were a little unorthodox, but very effective and enjoyable and part of the great spirit that only those who have shared the experiences in serving their country can generate.

One of our number, Frank Boan, was a great supporter of Legacy. He was a very modest and self-effacing man. It was Frank who promoted the idea of Torchbearers for Legacy and which dramatically changed the basic approach to fund raising for Legacy. He was greatly encouraged by the foundation President, Gordon Hack, Mick Hungerford, Bill Lucas and a host of others in their support of Legacy in a very vigorous and practical way.
One memorable occasion I remember ever so well was in the early days of the Sub-Branch. At that time I was still the Conductor of the RSL Memorial Band. The idea was to hire a popular vessel and take it on a night river cruise when all sorts of activity – some not strictly legal in the laws of the day – to raise money in a very convivial way for Legacy.

Thank goodness the booze bus was not even thought of at that time, nor the present system of the multi-nova cameras and a number of other devices that some of the more venturesome members would have thought were “not cricket” if used against a band of brothers trying to raise money for a good cause!
A great crowd of males arrived at Barrack Street Jetty. My task was to provide good bright music, including well known war songs up until 10.30 o’clock when the band was to be relieved of its duties so it could join in the fun. They were placed in a strategic part of the vessel so they could perform and most people could hear them if they wanted to, but I did not count on the ingenuity of one or two of our Sub Branch officials.

After the band had finished playing a few pieces, I was approached by members of the committee to go to an appropriate part of the ship where I would perform request solos for those who put up enough money by Gordon Hack’s standards. Then I would go back to the band and we performed some more items. As we repeated this procedure several times I found the band was playing worse and worse and certainly not up to the standards required even though we were donating our services.

While some of the “characters” had lured me away to raise funds from request solos, they plied the band with drinks through some extraordinary device which enabled them to pass drinks from what was referred to as the Saloon on the vessel up to the deck where the band was located. I was not amused. By 10.00 o’clock I was glad to prematurely release the band from its responsibilities for serious performance.

Hours later – after 1.00 am – looking very serious, standing to attention and with shoulders pulled back Gordon Hack, addressing the Captain and with difficulty, said – “Captain, you may return your ship to Barrack Street.”By this time the Captain was not in the best of humour. He was worrying about his ship and any laws which might have been broken if they came to the notice of the police.

His reply with a degree of obvious anger was “I would have you know I have been tied up at the Barrack Street Jetty for nearly two hours”.

This was some measurement of the social success of the evening. Needless to say, it was a great financial success. A good time was had by all and there were no police repercussions. Let me assure you, it was not always fun and games when the Sub-Branch was well established and people were actually lobbying to become members and attend our meetings in a part of the cafeteria section of Boans where we met regularly and had a series of carefully selected speakers. In the early days, the formal business was a nightmare to those who might be legally minded, but a joy to behold to those of us who were more concerned about friendship than formality. I remember one of the earlier meetings when Gordon Hack was presiding and didn’t bother about having the minutes of the previous meeting read. Someone asked the Chairman, “What about the Minutes.” Gordon’s response was, “What Minutes? Don’t you trust me?”

As you know things became a little more orderly and formal to the extent necessary later on, but most of us who know and loved Highgate, how it started and how it has performed, would not have had it any other way.

We might have started off in a rather informal happy-go-lucky and rather exciting way, but we can look back with pride on the way the Sub-Branch performed, how it has pulled its weight within the League and how it has been an outstanding sub-branch and, above all, faithful to the memory of those who paid the supreme sacrifice and those who paid for the rest of their lives through the injuries and sickness they suffered because of their War Service.

What is most important of all, Highgate has always remained faithful to its trust to the philosophies, policies and activities of the RSL.
Time marches on and many of us who were Foundation Members will not be around all that long, but I hope that under the new membership rules of the League there will be a continuing group of those who qualify for membership to understand and take up the torch to continue what was started by a great band of ex-servicemen immediately after World War II.

Our thanks go to those who have been responsible for this publication involving as it does the recorded names of members of the Sub-Branch.

It was no easy task. No doubt there will be some who have been omitted or incorrectly recorded, but I am sure most people will not get uptight about that.

More particularly, they will be grateful that somebody accepted the responsibility and produced what is a valuable record of an important sub-branch of the Returned Services League in Western Australia.